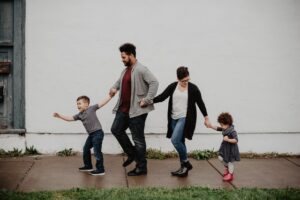 Hollywood itself is a borough or neighborhood. Moreover, it may be one of the most important and well-known neighborhoods in the world. There is almost no person in the world who hasn’t at least heard about Hollywood, let alone watch some of the films from Hollywood production. However, Hollywood is not only a place where filmmakers go to direct their movies. Can you imagine, people actually live in Hollywood. In this article, we are going to explore some of the most charming Hollywood neighborhoods (and ones bordering the borough itself) for families with kids.

Previously, we have explored the top 3 LA neighborhoods for seniors, now it’s time to turn our attention to Hollywood neighborhoods for families. So, without further ado, let’s explore the most important borough in the world!

Spaulding Square is a small, but charming community of Hollywood. You have probably seen this neighborhood already, but you weren’t aware that you are looking at it. For example, one of the most important horror movies, Halloween, was filmed at this location. There was the filming of another important and famous horror movie here, A Nightmare on Elm Street. But if you are afraid of the dark, don’t worry, Spaulding Square doesn’t have anything to do with the supernatural in real life.

This neighborhood was named after Armenians who escaped genocide at the beginning of the 20th century.

Located north of Melrose Avenue, south of Santa Monica Blvd., east of Western Avenue, and west of the Hollywood Freeway, Melrose Hill is a neighborhood that is designated as a Historic Preservation Overlay Zone. LA protects a part of Spaulding Square that way too. Homes in this protected area rarely change hands, but homes around them are being offered on the market all the time.

A charming area, it offers much to its residents. You’ll be in the middle of Hollywood if you decide to own a home here. It truly is a charming Hollywood neighborhood for families with kids. So get ready for your California move!