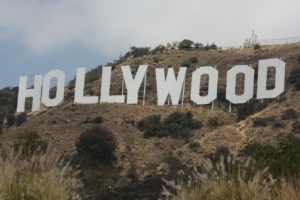 One of the misconceptions about Los Angeles is that almost from anywhere in the city you can see the Hollywood sign on Mount Lee. No, to look at the world’s landmark you need to go to it specifically, and even then … The path on the picture below is the closest distance you can get to it. Therefore, it is better to get a TV. 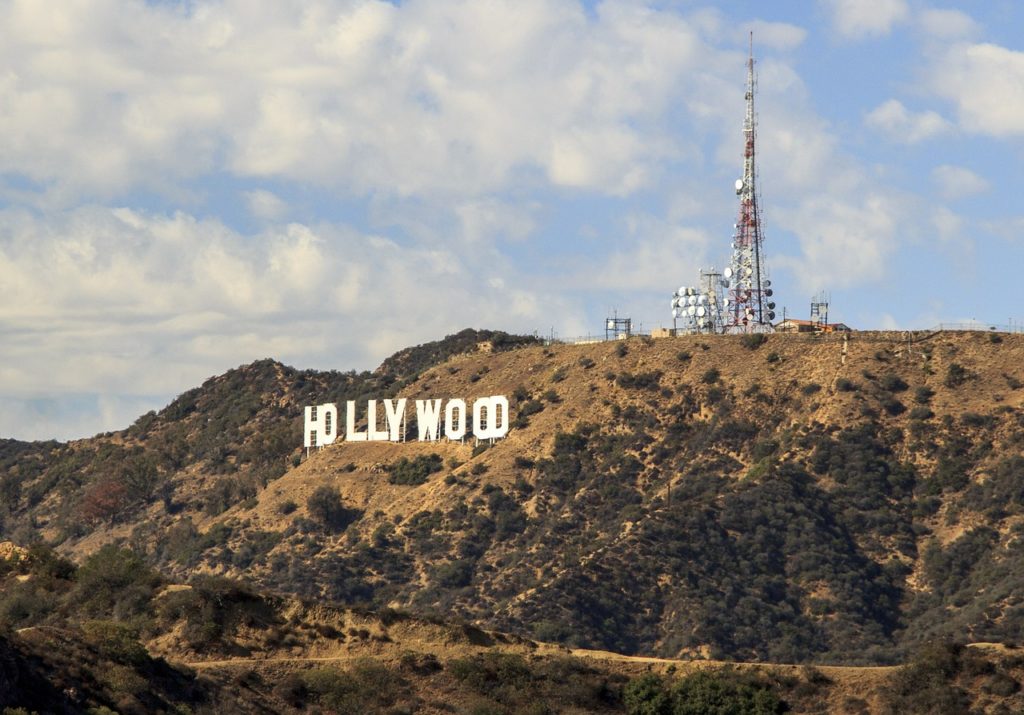 It is not necessary to see the sign itself – everyone saw it a million times in movies, cartoons and on postcards. The history of the sign is much more interesting than the sign itself.

For the first time the sign was put in 1923 – during the beginning of the Golden Age of Hollywood. That is the time when the films just started to bring fabulous incomes. The sign is almost the same age as Hollywood itself. There was a plan that it would stay there for only 18 months.

2. Hollywood sign was a big and expensive advertising poster

It was built by real estate developers S. H. Woodruff & Tracy E. Shoults in order to advertise new elite housing on the slope of Mount Lee. The construction of the sign cost $ 21,000, which is equivalent to today’s $ 250,000. Can you imagine that someone today invests a quarter of a million dollars in one, even a very large advertising banner?

3. Initially, the inscription was “HOLLYWOODLAND”

Since the name of the new area was Hollywood Land, that was the inscription on the sign. In 1949, the commercial chamber of the city decided to remove the “LAND” part. Interestingly, many Hollywood residents believe this fact is an urban legend.

Not only the number of letters, but also the height: the letters were 50 feet – five feet taller than today’s (45 feet) and had a much more complex system of wood and pipe supports.

The building company hired a caretaker – Albert Kothe – whose duties included the care of the sign and the replacement of light bulbs.

6. Earlier the inscription was shining at night

At the time, 4,000 light bulbs with a capacity of 20 watts all night long alternately flashed the words “HOLLY”, “WOOD”, “LAND” and “HOLLYWOODLAND”. People then considered it cool and progressive.

With the onset of the great depression, the real estate market stopped and the land on the hill stopped selling. Therefore, as the sign became unnecessary advertising, the sign-keeper Albert Coffee took off all the copper coils from the sign and sold it for scrap.

In 1932, 24-year-old actress Peg Entwistle who moved to Los Angeles from New York with her uncle and who did not get a part in the film that she dreamed of, went to the top of Mount Lee, climbed the letter H and jumped down into a 30-meter ravine. The body discovered a woman who was strolling near the sign two days later.

That’s really something you don’t expect from the sign on the steep slope of the mountain, but in the early 1940s, the same caretaker, Albert Coffee, drunk heavily, drove his Ford Model A 1928 off the cliff atop the mountain. After overturning several times, the car hit the famous letter “H”. Albert himself was not injured, but the car and the letter were destroyed.

In 1944, the city of Los Angeles bought from the building company 455 acres of land, including the one on which the sign stands. The city did not want free real estate advertising on its land, but allowed the sign to stand for another 5 years. In 1949, the city decided to demolish the sign, but Hollywood residents came to its defense. Then they decided to restore the sign and remove the word “LAND”. 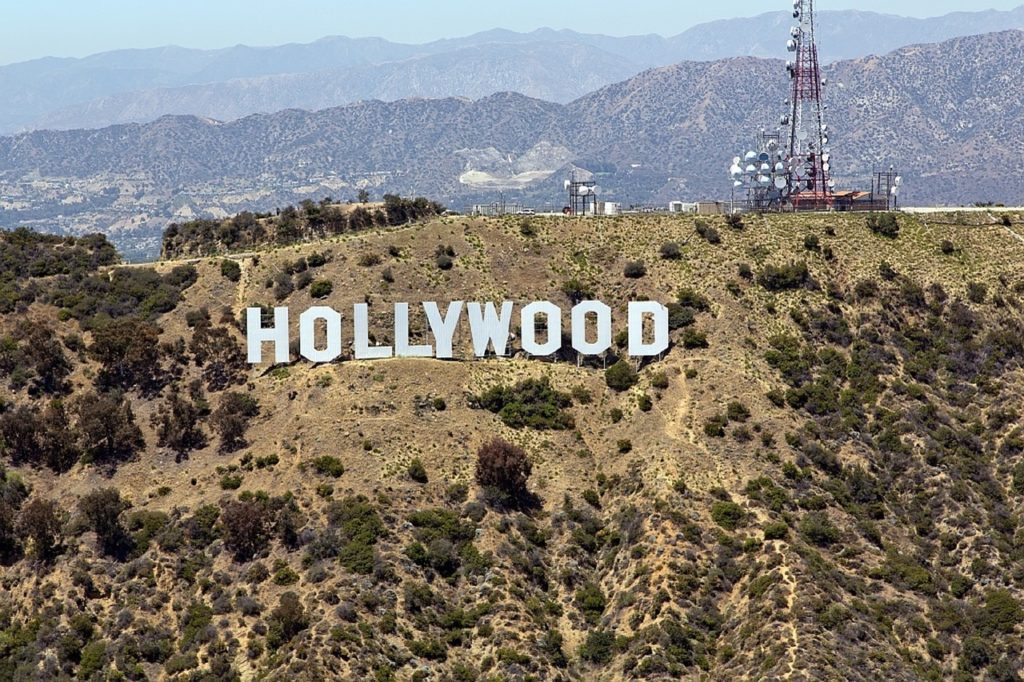 In 1973, the Hollywood sign received the official status of the attraction under the number “L.A. Cultural and Historical Monument #111. ” And with it – and a new layer of paint.

In 1976, in support of the law on the legalization of marijuana, a pair of students armed with rolls of white and black cloth turned the sign into “HOLLYWEED“.

13. In the late 70’s the sign started collapsing again

In the late 1970s, the Hollywood sign came to the greatest neglect during its entire existence. While the upper part of the first letter “O” fell off, the third letter “O” fell completely.

The Chamber of Commerce very much asked for the restoration of the sign, but the founder of Playboy, Hugh Heffner, came to the rescue. He organized a charitable company and, literally, auctioned each letter for $28,000, thus collecting the quarter of a million dollars needed to restore the attraction.

The first letter “O”, for example, to this day belongs to Alice Cooper, and Y belonged to Hugh Heffner himself.

In 1992, the Hollywood Trust Trust Fund was established, providing content and advertising of attraction. Due to this fund, the sign is periodically repainted and a 24-hour webcam has recently been installed, which, however, is of little use because the sign is not illuminated at night. 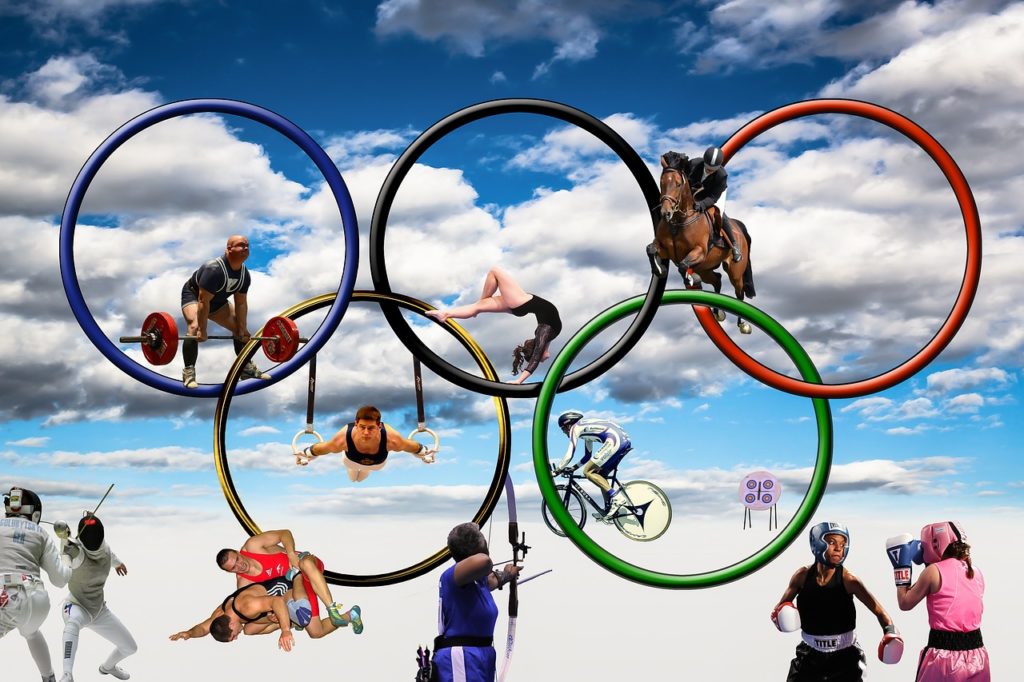 For the first time since 1949, the Hollywood sign was highlighted during the Summer Olympic Games in Los Angeles in 1984. Today the sign is not illuminated at night.

They closed not only the approach, but also the entrance to the mountain itself. In order to secure the sign of vandalism, the city closed the access to the mountain. The security system at the sign, moreover, including barbed wire, infrared cameras, motion sensors, round-the-clock video surveillance, signaling and helicopter patrols, is hardly inferior to Fort Knox and is under the jurisdiction of the US Department of Homeland Security. 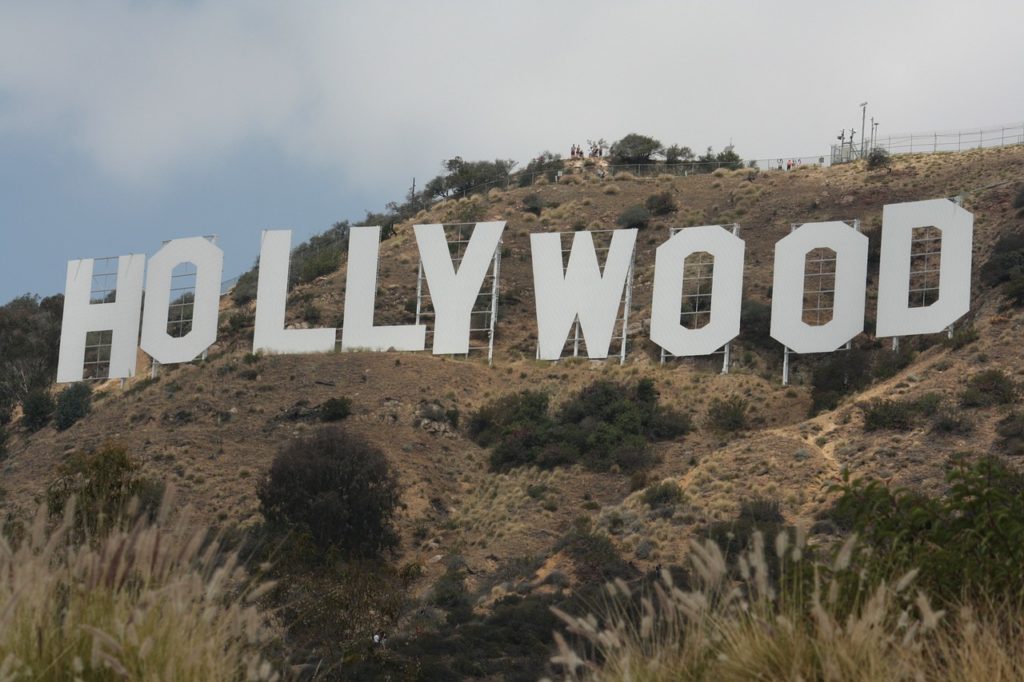 Any use of the Hollywood sign outside the context of the story about the sign itself violates copyright. Any shootings of films, advertisements, clips with a sign in the background without permission is out of the question.

If you want to sell a snapshot of the Hollywood sign, for example, you have to pay $60 for permission to take pictures and $625 for a video, even in a public place. But, this is not all – if you want to use a photo or video commercially, then you need a license agreement to use a symbol or image similar to it.

And there is a certain company GlobalIcons, which really monitors the observance of these rights. Only in America could they register a trademark on letters on the mountain visible from hundreds of public places around the city and behind which there is no product. Only in Los Angeles really will they monitor the observance of such a trademark.