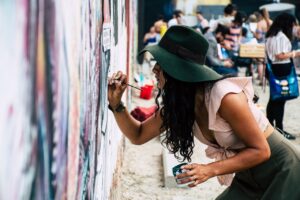 Top 5 differences between LA and NYC according to artists

Since many people are moving from New York City to Los Angeles and another way around, we wanted to show you the top five differences between LA and NYC. They are often compared and yet many will agree that they have nothing in common. If you think that is weird, you are completely right – it is! We won’t be talking about which city is better since that is impossible to say. After all, that is very subjective. What is good for one can be bad for another person. This time we wanted to ask artists about the differences between these two amazing cities. So, here is what we found out from them.

#1 the most obvious one is lifestyle differences

New York City’s fast-paced lifestyle might leave one feeling hurried. On the other hand, some people adore NYC hustle. The pace of life in Los Angeles appears to be slower, making it easier to get around. New York City and Los Angeles are two excellent places, but the residents of each city place different priorities on the things that are important to them.

Locals in LA are incredibly health-conscious (kale is king here) and highly concerned with their physical beauty. People in Los Angeles seem to be drowning in a sea of high-end fashion and celebrity status. As opposed to the fact that in New York City, you may go to J.G. Melon and unknowingly bump into a millionaire that looks and dresses the same as everyone else.

If you are into fasting, kale, and a healthy lifestyle you should consider LA. If you like the hustle, parties, and casual lifestyle NYC will be better suited for you. Also, some people claim that LA is better for dog owners.

In New York City, even the most onerous task in the world, laundry, isn’t a problem. The next day, you can drop it off at 8 a.m. and grab it (fully cleaned and folded) at 4 p.m. If you can afford this place you won’t have any problems.

Los Angeles, on the other hand, has a seemingly endless supply of exciting things to do, but it’ll never be misunderstood for being a city that never rests. Maybe Los Angeles takes a nap after all. Don’t expect your midnight desires to be fulfilled unless you’ve prepared ahead in California, where life is generally more laid-back than in other states. Living in NYC rather than Los Angeles is the better option in this sense. This is one of the reasons why many people are moving from LA to NYC.

New York Metropolis is the most densely populated city in the United States, so you can expect to see a lot of people. Los Angeles is a highly sought-after destination, so plan to stand in line at popular attractions, but the crowds aren’t as bad as they are in New York. The city layouts of these two cities are vastly different. NYC is a lot more manageable in terms of space than LA. In LA everything is somehow spread apart. Because everything in New York City is so close together, avoiding traffic jams is not an issue. If you are planning to move to NYC, you should call benhur.com. This city is too big to DIY it.

#4 Something that worries many artists – affordability

Your life there will not be cheap but maybe your relocation can be affordable? The cost of a city apartment in either New York or Los Angeles is astronomical. To put it another way, these two metropolises are among the world’s priciest cities. When weighing the pros and drawbacks of relocating to either Los Angeles or New York City, it’s important to factor in the cost of housing. Housing costs are a major factor in New York Metropolis’s ranking as the world’s 6th most expensive city. A little Upper West Side one-bedroom costs about $3,000. Because of the high expense of housing, many artists live with roommates or are forced to drive 45 minutes or more each way to work. But pretty much all of them will tell you that it’s worth it.

If you decide to move to NYC

If you are moving to NYC for your career or any other reason, you should consider downsizing. Mainly because of the prices. But that doesn’t mean you can’t have all your stuff with you. You just need to be creative. You need a safe solution for excess items. That means hiring movers to rent you good and affordable storage near your new place.

#5 Differences between LA and NYC when it comes to diversity

Living in NYC or LA will expose you to a wide range of people. That is great for artists – you are exposed to different cultures, languages, and even food.  More than half of Los Angeles people identify as Hispanic/Latino, while just 28 percent identify as white, making it one of the most ethnically diverse cities in the United States.

Los Angeles is diverse, but you won’t realize it until you venture out of the city’s crowded central area and into the diverse neighborhoods that dot the countryside. In comparison to New York City, it’s more difficult to mix with people from different backgrounds in Los Angeles. NYC is more open and casual about diversity. There is a place for everyone no matter race, gender, religion, or anything else.